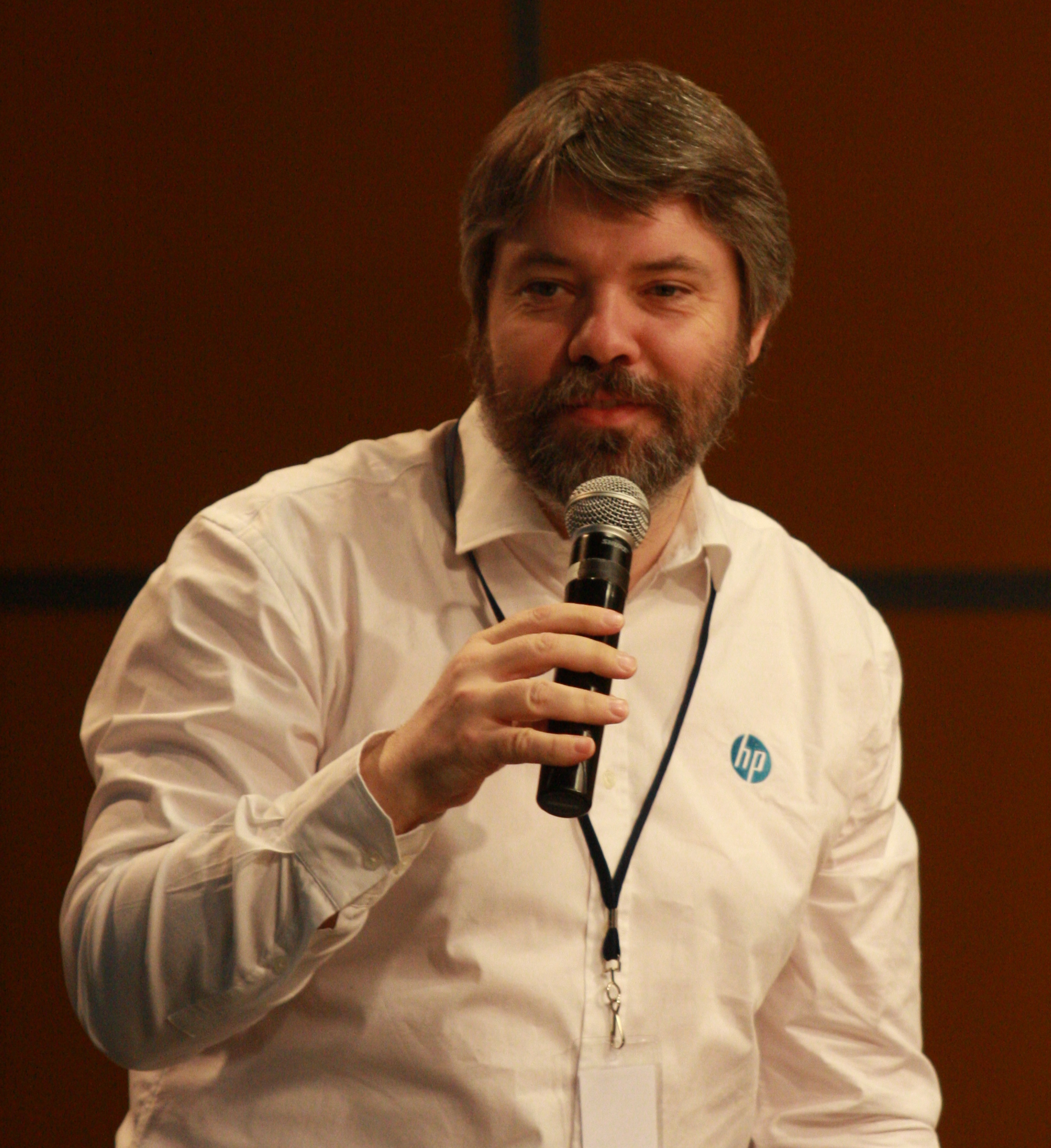 Hi Bruno, can you introduce yourself? What is your job? Do you have any particular hobbies?

BC: My name is Bruno Cornec. I’ve worked at HP for 13 years now, and have multiple hats there. My day job is to be an Open Source and Linux (OSL) Technology Architect in a European Solution Center, where we host customers wanting to get information on our offerings through workshops, and test concrete solution stack during proof of concept. In parallel, I’m leading the EMEA Open Source and Linux Professional, gathering 1200 people interested in these topics, and also involved in OSL Governance.

In addition to computers which is also a hobby, I like classical music in general and early / ancient music in particular, sing and play the recorder, and attend lots of concerts. I also like photography and of course taking care of my family and my 3 kids.

You are a long time Mandriva contributor and now Mageia. Why this choice and why did you start again with Mageia?

BC: I didn’t start with Mandriva in fact 😉 I started using Linux in 1993 with Slackware and kernel 0.99pl14. After some years compiling software more than using my distribution, I found the concept of packaging very useful, and adopted Red Hat rapidly after it appeared. But after some years dealing with dependencies manually, I finally found that Mandrake was providing, with urpmi, a very nice way to solve my pain point, so again moved an adopted it. The move to Mandriva was obvious, and the move again to Mageia was also for me obvious as it was a community driven project, which I find more valuable and nearer to what I search for in FLOSS. And as I’m doing lots of stuff, I thought that if I had a bit of time to dedicate to a distro, it should be a community one, RPM based to benefit from the background I had, (and not RPM5 !) and with nice people caring for it that I knew for many years, and appreciated the dedication and hard work.

Also Mandriva before and Mageia now are communities which are really welcoming contributors.

What is your contribution to Mageia ?

BC: I’m not a major contributor, but try to enrich the distribution in order to make it fully usable for what I do. So I package my upstream projects (MondoRescue and project-builder.org) as well as tools that I find useful and that were not packaged yet. As I’m building packages and repositories for other distributions, I added tools such as debootstrap, dpkg, createrepo, mrepo, yum. I also added tools made by fellow HPers such as collectl or netperf, rare tools I still have a need for such as uucp, lbdb, mirror. And I’m updating the ones I use on a daily basis such as tellico (I have a huge number of music CDs !).

Also I added a page on the wiki about auto_inst, coming from Mandriva, and adapted it a bit so it was accurate for Mageia. I use automatic deployment a lot and think this is a Mageia feature not well enough known (as it was in Mandriva)

You recently attended Linuxcon in the US, and had a conference about Mageia. Why were you speaking about it? What were the main questions about Mageia?

BC: I think the distribution lacks a bit of communication, which is normal due to its community nature. So making a bit of noise around it to invite people to look at it and compare with the more “famous” Fedora or Ubuntu is a good way to attract users who base their judgement on the quality of the work, nice KDE and LXDE integration (can’t comment for the other ones I do not use), great package management tools and set of apps available, rather than just on the reputation.

So my presentation, that you’re free to reuse and improve for your own talk, was trying to present what is really special about the work done by this community and show the richness of its features. After all, a lot of people are surprised that I’m running it on my professional laptop, so this was a way to give answers.

In the room I had, nobody was aware of the distribution, so there was the possibility to attract 15 more people. But more over, it was a unique opportunity to have them all sing happy birthday as it was the 3rd anniversary of the launch of Mageia ;-).

Why would you recommend Mageia?

BC: For the quality of the community, both from a human perspective and from a technical perspective as both are key to have a great project. Then I’d recommend it for its great set of tools for package management (urpm*) and the quality of the packages made, as I rarely have issues myself (of course, when I have, I can fix them which is also extremely important for me).

I like the fact that we have packagers who closely follow the major projects and deliver new versions on very regular basis, coupled with a reasonable life-cycle, which allows me to update all my systems roughly once per year and benefit from the latest versions of apps at that time.

I really like the nice work done to have some of the best hardware support available. With MCC it’s so easy to add an HP printer e.g. that even myself a CLI guy just use it ! Same ease of use for wireless, for packages (MCC is also great for that, even if I generally use CLI there). Kudos also for the systemd integration, even if I clearly still regret SystemV init.

I like the installer, auto_inst as a perl structure is just brilliant, the various kernels provided with DKMS and additional non-free drivers to make life easier for end users. I also like msec, I think it’s a good differentiator in favour of Mageia.

Mageia is also a great platform for servers and developers, not only for end users looking for an alternative desktop. All my personal servers and work servers are Mageia based, and all my upstream projects are developed with it as well !

Do you have any advice in terms of goals, organisation… ?

BC: I think we are in need of additional packagers to spread the load. Some packagers are making a huge contribution and manage hundreds of packages. As there are always new additions welcome (OpenStack, oVirt, Hadoop, iTop, …) we need more arms to keep up the good work done up to now. So a recruitment campaign would probably help.

Also having Mageia Ambassadors to promote the distribution and increase usage as well as recruit packages, writers, art designers would probably be useful as well.

As for the overall goal, nothing more than world domination 😉

Working for a big hardware manufacturer, what is its position regarding the multiplicity of Linux distributions and especially the community based ones?

BC: I think a lot of hardware manufacturers today act like HP does: in order for our hardware to work seamlessly with Linux, we work with the upstream kernel community in order to have all required drivers upstream. That way every distribution, deriving its work from the upstream kernel will work out of the box on our platforms. And that way the multiplicity of distributions doesn’t create a real issue. Of course we are not supporting all distros directly, but the community has all the sources to do it. And some distributions, more asked for by our customers end up being supported, such as Ubuntu on our servers recently.

For HP, this way of working is particularly true for servers, printers, workstations, and professional desktop & laptops, while consumer machines are always a bit more difficult to deal with due to the rapid change of hardware components in them, and the low number of requests for Linux on them.

How do you see the future of Linux, both on server and desktop side?

BC: Well, I think since 1995 that there is no way other than Linux for I.T. ! Of course, it took a bit more time for others to realize I was right 😉 But on the server side, HP sells at least 25% with Linux today, and this will increase again with the adoption of Cloud based solutions which are nearly all Linux based. Same stuff for the new big data trend and all the Hadoop related solutions.  On the server side, I see even more adoption from customers coming from classical data center solutions such as RDBMs for example. Here, no doubt the future is promising, as is the present.

On the desktop side, I couldn’t agree more with what Linus said during LinuxCon in Edinburgh. I also told everybody about the “year of Linux on the desktop”, and was wrong. Well sort of, as Linux is now used on so many consumer devices (phones, tablets, embedded devices) that part of the consumer world has shifted, but doesn’t necessarily know it.

However, I’m disappointed by the lack of adoption on the desktop and laptop. I think, having used it every day of the last 18 years to do everything I need to do with a computer, that we have mature solutions, great software (Digikam is just fantastic and so simple for an amateur photograph like me, or Tellico for a CD fan) and openness to interact with everything. We need to show our Linux usage on the desktop to more people and demonstrate what is possible. Of course, being free always requires a bit more work than following the group of Macs or Wins, but it’s worth it. I really couldn’t live without the possibility to change what I need to, when I need it, on my computer. This is not even required by end users today, but they should adopt it without fear, rather with enthusiasm and rediscover the fun of I.T.

And Mageia is definitely part of this game of strong I.T. capabilities and fun to use and hack!

This entry was posted in Mageia, packager, users. Bookmark the permalink.