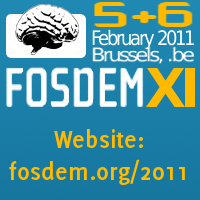 This week FOSDEM started, one of the biggest European Free Software events. As announced previously, the Mageia team was present, gave 2 speeches, and held its first General Assembly, among other things.

﻿FOSDEM started by an improvised dinner in a pizzeria ( and we were quite lucky to find one that accepted a 10 person group ), followed by an informal meeting in a Bruxelles pub near the Manneken Pis, where we discussed various technical subjects such as the different types of beer, how to run Meego on n900 or the lack of goverenment in Belgium, among others. Then we left to our respective hotels for a deserved rest before plunging in the various FOSDEM activities.

The first day was the occasion to discuss and to setup our booth. ﻿A special feature of FOSDEM is the location of the exhibition – it’s the atmosphere of subterranean hallways, a remarkable difference to the glamorous lighted fair grounds of Solutions Linux and other meeting places. Nevertheless these hallways were packed with all kinds of projects and with all kinds of interested visitors.

Mageia was no exception. Thanks to the generosity of the GNOME people we were able to have a booth among other free software projects, just next to the Fedora booth in the main corridor. Damien had brought the first boxes of Mageia T-shirts to be sold to the visitors at the Mageia booth. We offered a selection of black and white T-shirts (because we believe in choice) and wrote on the price tag “at least 10 €” for a T-shirt. We also gave away free stickers to spread Mageia. The sales in the two days at FOSDEM resulted in 625 € for Mageia’s donation fund.

The first day was also the time for first-time-introductions, of people who often experienced a long time of cooperating with each other but who never met in person before. There was time for face to face discussions, questions and answers.

After an exhausting day where everybody made contact and discussed with old friends or made some new ones we went to the Mageia dinner organized by Anne in Bruxelles downtown.

But FOSDEM is not only the occasion to have a booth and to answer questions about the project, it is also the perfect moment for giving informational talks to a technical audience composed of several free software enthusiasts.

We were lucky to have 2 slots for that purpose, the first one in the cross distribution developers room on Sunday morning, and the second one in the LibreOffice developers room on Sunday afternoon. Both talks followed the same skeleton (the one that Romain posted on the marketing mailing list) but we decided to have a different focus for each one.

The morning talk was more about presenting the project, followed by the lessons learned by forking on a technical level, like the issue of having hardcoded path and name everywhere, the difficulty to rebuild everything from scratch, and so on. The afternoon talk was aimed at presenting the governance model of the project and to share our work on this part. Both were well received. They led to some interesting contacts and clarified the situation regarding the project. You can see the first one on YouTube

FOSDEM was also the moment we chose for the first General Assembly of Mageia.Org. Despite some last minute changes due to a misunderstanding caused by our habit of using UTC for everything, we managed in time to find a 1-hour slot in a free room for the assembly.

First Anne (ennael) presented the moral report, summarizing everything that we did in the previous months. Then Damien Lallement (damsweb) followed, presenting the financial report, explaining the various expenditures of the association in the past months and gave a forecast. In simple figures Mageia received ﻿8,833 € in donations and spent 3,310 € (mostly for servers and other hardware). Both documents will also be published on the Mageia website soon.

The next topic of the assembly was the announcement of the results of the first board election, which was held among the founders via Epoll, following a decision in a previous meeting of the founders. This way the results were published online at the same time. The first board consists of 6 persons:

The board creation was also the moment we chose for starting the creation of the cryptographic keys used to sign our software, our packages and our ISO’s. Nicolas Vigier (boklm) and Michael Scherer (misc) created and split the main key among the board members, using some state-of-the-art cryptographic system they will explain later in a blog post.

Like every year, FOSDEM was a great experience for all participants, a revitalizing moment in the year were we can fully feel the spirit of collaboration that makes free software so unique. For Mageia this event will surely become a fixed point in time every year to meet, recapitulate, look forward, and have our annual general assembly.