Posted on October 23, 2010 by Anne Nicolas
On behalf of the Mageia system administration team (aka sysadm team), I am happy to announce that we finally managed to rack our first servers in Marseille on Friday, despite the gas-oil shortage, the strikes, and the various issues we had! 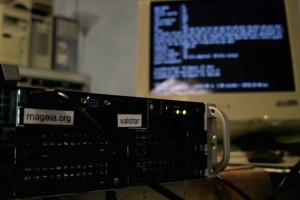 All of this would not have been possible without the generous offer of Ielo.net and Lost Oasis, who offered to host our servers in their data-center in Marseille. They have been already hosting zarb.org, TuxFamily and LeaLinux since several years, and provided a lot of support to free software in France.

Also this would not not have been possible without the help of the several donors who helped us with hardware and money to buy disks and to travel to the south of the country. Again, many thanks to all of you.

And finally, this would not have been possible without the hard work of my team mates, Damien and Nicolas who drove from Paris to Marseille, fetched the pieces and assembled the servers, and without the help of Pascal who lent us a hand when setting everything up, and who volunteered to drive to the server room and  push the button in case of problems. We hope we will not ask him to do it too many times, and we would love to have remote administration, but this was not a option given the fact that only one server had one RAC.

So let’s welcome Alamut, Ecosse, Jonund, Valstar and soon Fiona. For those that wonder where does the names come from, we have played a simple game on the sysadm list (which is badly configured at the moment I am writing this but it is a public mailing list by design, this will be fixed later).
For the techno addicts that would like to see the hardware specs, we will document them on the wiki later, once we have set up the permanent wiki.

So the next steps of infrastructure deployment, after some deserved rest (in what’s left of the weekend), will be to set up the basic infrastructure for administration (ie puppet, svn, accounts, etc).
Then we will proceed into migrating the DNS from zarb.org to our servers, and set up a first LDAP directory to hold accounts, as this is a central component in our planned infrastructure. After that we will have to setup SQL servers, apache, and some web applications like Epoll, to start working on team creation. Stay tuned for news and pictures on the blog, (and thanks for reading until the end 🙂 ).
This entry was posted in Uncategorized and tagged mageia, sysadmin. Bookmark the permalink.

5 Responses to News from admins