Two events are competing for your attention in the Mageia world today: the international Software Freedom Day, and Mageia 4’s EOL, effective immediately.

For the former, we want to wish you all a merry Software Freedom Day and hope that had the opportunity to attend one of the numerous related events.

For the latter, we can only encourage you again to upgrade to Mageia 5 as soon as possible so that you can benefit from further security fixes and bugfix updates. The full blog post about this can be read here. At this occasion, we would like to present to you a home-brewed tool that facilitates dumping ISO images to USB sticks; particularly handy if you’d like to upgrade to Mageia 5 using the classical installer DVD.

Several programs are available for dumping ISO boot images to USB sticks – for installing the operating system. Doing this by hand is hazardous: a mistake can overwrite a disc partition. Mageia has its own package, ISOdumper, which does a lot more than the basic task. It is available from normal repositories, you can install it through the Mageia Control Center or Add/Remove software. The latest release is 0.42. 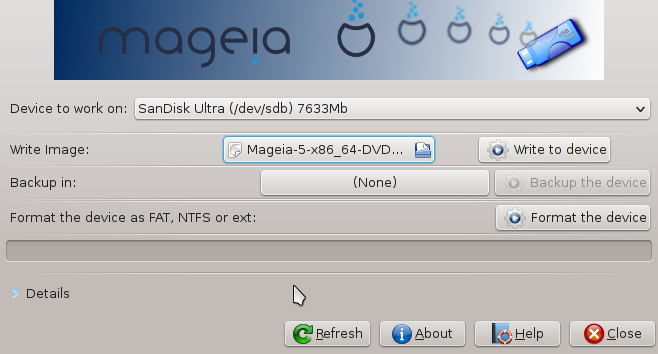 It is a GUI program which requires, and solicits, root privileges. In every case you must choose in the ‘Device’ list the USB stick you wish to use.

ISOdumper has its own wiki page with detailed usage instructions. Its code is hosted at Mageia’s git repositories, and you can also download the 0.42 release source tarball directly.

We had a tool named usb-imagewriter in our repositories to dump ISO images on USB sticks, but it was limited to deal with .img files, and the progress bar wasn’t working. A Mageia user and contributor, Papoteur, thus started to hack it, and as it was not maintained upstream anymore, had to fork the project.

He then added a feature for backup which creates a snapshot of the USB stick content before writing the ISO image. Some users complained that it was difficult to recover the device when the installation was done, thus Papoteur also added a simple feature to format the stick.

On the technical side, the tool is written in Python and uses GTK+/Glade UI library. The traditional dd command is replaced with customized writing functions and USB detection uses Udisks2 tools. The formatting feature is a tool from Clément Lefebvre (Mint).

We all thank Papoteur for his work on this handy tool! Have fun with ISOdumper and Mageia 5! And farewell Mageia 4, you were a great release! 🙂

6 Responses to Made in Mageia: ISOdumper