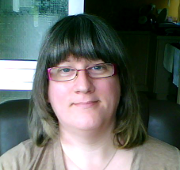 Hi Claire, can you introduce yourself? Where are you from? What is your job?

Hi. My name is Claire Robinson and I was recently elected as the QA team leader.

I am 40 something years old and live with my partner Russell in the Black Country, UK. It is that part of the Western outskirts of Birmingham where it joins with Wolverhampton and Dudley and all sort of fudges together. I haven’t always lived here and am trying (and failing) not to pick up the distinctive local accent.

I’ve always enjoyed tinkering with computers, I started many years ago with a BBC model B which I used to enjoy programming and playing games on and progressed through 286’s onwards. I still have the BBC to this day!

I’m currently a housewife after having to close my little business a few years ago. Money is tight now but we just about cope. If anybody has a job going please let me know 😉

How did you come to Mageia and QA team ?

I started using Linux in around 2004 when somebody suggested Slackware was a good way to learn Linux. I don’t think they liked me very much! It was a very manual process to accomplish anything back then, they were right though. I used it as a basic web server and ran a couple of IRC bots but at the time the only spare PC I had wasn’t really capable of running a full desktop.

When I upgraded I tried early Fedora Core’s and Ubuntu’s, both of which had not long started but eventually settled on Mandriva, as it had just become, which suited me well.

I used Mandriva to power my little business. I reported bugs and used the forums a bit but never really contributed beyond that.

When I heard of the fork, I noticed most of the names I recognised as being active contributors were migrating to Mageia so I thought I should follow them and installed Mageia 1 when it became available.

I saw one day on #mageia IRC channel that somebody was asking the best way to help out. I joined in and somebody suggested to try the QA team, which was just really being established. I attended a meeting on IRC and the rest is history.

How is QA team organized ? How is it going ? What do you find difficult in QA job ?

The QA team has a flat structure and like other teams, we are all equals. There are still very few of us so we are always very busy. Mageia is a community distribution so community is an important aspect within the team. We enjoy what we do and try to have a bit of fun while we’re at it.

Many reading probably don’t realise that every update they receive has been tested by the QA team.

Since Mageia 2 was released most updates are for both Mageia 1 and Mageia 2 so our workload literally doubled overnight. At times we have struggled to keep up with the many bugfixes being released and security updates aswell. There were really very few of us to handle that workload so we have been trying to recruit new people into the team.

Why do you think it’s usually hard to find contributors for the QA team ?

It’s not as sexy as packaging and not as visible as bug triage but is one of the most important teams we have. Unless we miss something, most people probably don’t even realise we are here.

What are QA plans for Mageia 3 ?

Our immediate plans are to develop a strategy which will enable anybody testing Mageia 3 alpha, beta and RC releases to be able to test all aspects thoroughly and feedback their findings.

We also need more people in the team to keep pace with the workload, especially when the Backport medias open in the near future.

Looking to the future it would be good to be in a position to be able to support an LTS Mageia release. We have to be careful not to over reach at the moment though and commit to anything we are not able to properly support.

If you had to convince somebody to join team, what would you say to make it attractive ?

I think most importantly is to realise that You Can Help, you can make a difference and you too can ‘make Mageia’.

It’s a great feeling, knowing you’ve played an important part in creating something which is used and enjoyed by thousands around the world!

We’ve begun to create a repository of testing procedures and have some useful tips and tricks on our wiki pages. You’re never alone in QA, you need never feel stuck or intimidated by things, there is always somebody to ask. We actively encourage people to do so.

It is important to be able to see things from a user’s perspective in QA. It does have it’s technical side but we’ve found people are soon able to pick that up and we are always keen to teach.

If you’ve been thinking you’d maybe like to do something but not sure what then why not have a read of our wiki pages and come and say hi, we would really appreciate your help If a 40 something housewife from the Black Country can do it, then so can you :).

Are there any other fields you’re involved with in Mageia or you would like to join ?

I have contributed with the documentation team prior to the release of Mageia 2, working on the help texts for the installer and have done a tiny bit for the bugsquad. My time is very much used in QA now though.

Imagine you find Aladin’s lamp. What would be your 3 wishes for Mageia?

ARM. It would be great to see the ARM port come to fruition. I’m one of the thousands waiting for a raspberry pi so it would be nice to see Mageia on there.

LTS. I think a long term support release would enable the use of Mageia in places it might not otherwise reach.

BIG. Really, just big.. More people. It takes people to make a community. People of all backgrounds and abilities. There is no business behind Mageia. I’d like to rub the magic lamp and wish that everybody reading this will get involved and help to ‘make Mageia’.

(and don’t forget the QA team!)

7 Responses to They make Mageia: Claire Robinson aka MrsB